The story processes on, I’m still discovering got new techniques on the software and editing the story as I go along. I post screenshots on my twitter page @reebeksart. I want to be authentic in my drawing style, I included gesture scribbles/ lines. So far it looking very polished and the two characters personality are showing more. I’m taking my time to work on two pages a week, which manageable and allow me to come up with new ideas.

Clip Studio Paint contacted me and asked to feature one of my screenshot of my comic pages on their official website! You can see my post on the artist testimonial section. 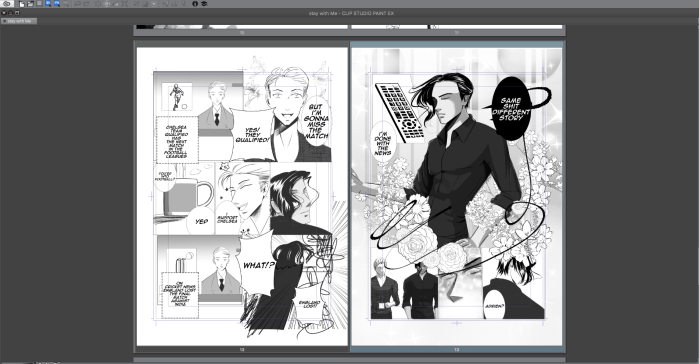 I always watching world Greatest first love anime on CrunchyRoll. The anime is an insight on how manga publishers work. Ritsu and Tanako are both manga Shojou editors. Thier jobs is to work closely with the manga artist.

Chiaki and his team work in a studio. They working endlessly to meet the deadline.

It seem that working on a manga series is a lot of work and stressful! Luckily for me I am a one man band and don’t have to meet deadline.

I see the story board or rough draft in the anime where the character discus the rough draft. The drawings are drawn very simple, thumbnail rough, include the dialogue. The manga artist makes many pages of rough drafts drawings then show them to thier editor.

I noticed watching World Greatest first love, the manga artist divide the paper and draw two pages roughs in one page. This give them an idea how the manga read into the next page. 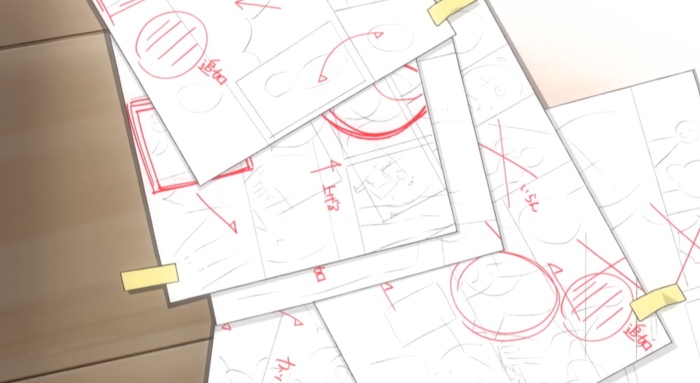 This gave me an idea to do the same with my drafts. I am using a layout paper to do my manga rough.

My manga will read from left to right western style.

After I am happy with the roughs, I will start working the real manga on my computer on Clip Studio EX. I have a Wacom Display Tablet so it more easily draw with ease.

I am still working on my manga and uploading them on my Deviantart page. I am trying to find a good method in creating my manga. So far it coming much more nicely together.

Tip: Stick to manga that you like or inspired by. Take note on how the manga is directed, how the tone convey the mood and the panels works on the page.

Nichijou gave me encouragement when I feeling like my manga is not good enough. I just remember how Mio chan felt with her manga. She inspires me to follow your dreams in becoming a manga artist. 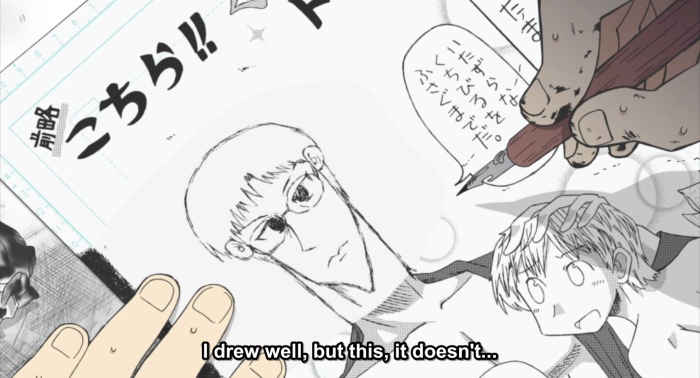 Episode 20 on Nichijou is when Mio’s friend help her complete her manga, but did not go well. It is a good episode to watching because you will see that every artist has those days when nothing is coming out right. 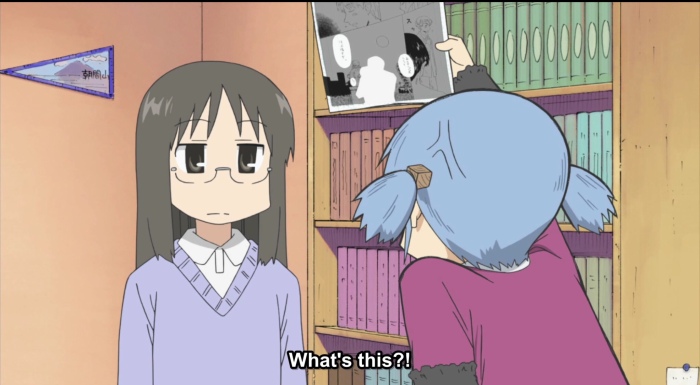 starting on creating my own manga pages/ series using clip Studio Ex. I have not developed a proper plot for this comic. I am developing my visual narrative.  so far the drawing are looking great.

I uploaded more of my  manga comic on my Deviantart page aswell.